Baptisms conferred with arbitrarily modified formulas are not valid

The Sacrament of Baptism administered with an arbitrarily modified formula is not valid, and those for whom “baptism” was celebrated in this way must be baptized “in forma absoluta” — that is unconditionally — by repeating the rite according to the liturgical norms stipulated by the Church.

It is Christ who baptises

In an explanatory Doctrinal Note accompanying the responses, the CDF says that “the deliberate modification of the sacramental formula was introduced to emphasize the communitarian significance of Baptism, in order to express the participation of the family and of those present, and to avoid the idea of the concentration of a sacred power in the priest to the detriment of the parents and the community that the formula in the Rituale Romano might seem to imply”. On the contrary, the note says, quoting Vatican II’s Sacrosanctum Concilium, “when one baptizes it is really Christ himself who baptizes… the Lord has the principal role in the event being celebrated.”

The Doctrinal Note recognizes that “the parents, godparents and the entire community are called to play an active role, a true liturgical office” — but this, according to the conciliar text, requires that “each person, minister or layman, who has an office to perform, should do all of, but only, those parts which pertain to his office by the nature of the rite and the principles of liturgy” (Sacrosanctum Concilium, n. 28).

A wound inflicted on the ecclesial communion

“With debatable pastoral motives”, the note continues, “here resurfaces the ancient temptation to substitute for the formula handed down by Tradition with other texts judged more suitable”. However, “the recourse to pastoral motivation masks, even unconsciously, a subjective deviation and a manipulative will”, the note affirms. The Second Vatican Council, in continuity with the teaching of the Council of Trent, declared it did not have “the authority to subject the seven sacraments to the action of the Church,” and declared definitively that no one “even if he be a priest may add, remove, or change anything in the liturgy on his own authority”.

In fact, the Congregation asserts, “modifying on one’s own initiative the form of the celebration of a Sacrament does not constitute simply a liturgical abuse, like the transgression of a positive norm, but a vulnus [wound] inflicted upon the ecclesial communion and the identifiability of Christ’s action, and in the most grave cases rendering invalid the Sacrament itself, because the nature of the ministerial action requires the transmission with fidelity of that which has been received”.

The nature of ecclesial ministry

In the celebration of the Sacraments — the Doctrinal Note explains, — the assembly does not act “collegially”, but “ministerially”; and the minister, when pronouncing the sacramental formula, “does not speak as a functionary who carries out a role entrusted to him, but he enacts ministerially the sign-presence of Christ, who acts in His Body to give His grace”. The note continues, “In this light must be understood the tridentine injunction concerning the necessity of the minister to at least have the intention to do that which the Church does”. That intention, it goes on to say, cannot remain “only at the interior level”, with the risk of subjectivism, but must also be expressed in an “exterior action” carried out not in one's own name, “but in the person of Christ”.

The note concludes by saying that modifying “the sacramental formula implies a lack of an understanding of the very nature of the ecclesial ministry that is always at the service of God and His people and not the exercise of a power that goes so far as to manipulate what has been entrusted to the Church in an act that pertains to the Tradition.” Therefore, it says, “in every minister of Baptism, there must not only be a deeply rooted knowledge of the obligation to act in ecclesial communion, but also the same conviction that Saint Augustine attributes to the Precursor, which ‘was to be a certain peculiarity in Christ, such that, although many ministers, be they righteous or unrighteous, should baptize, the virtue of Baptism would be attributed to Him alone on whom the dove descended, and of Whom it was said: It is He Who baptizes with the Holy Spirit’” (Jn 1:33). 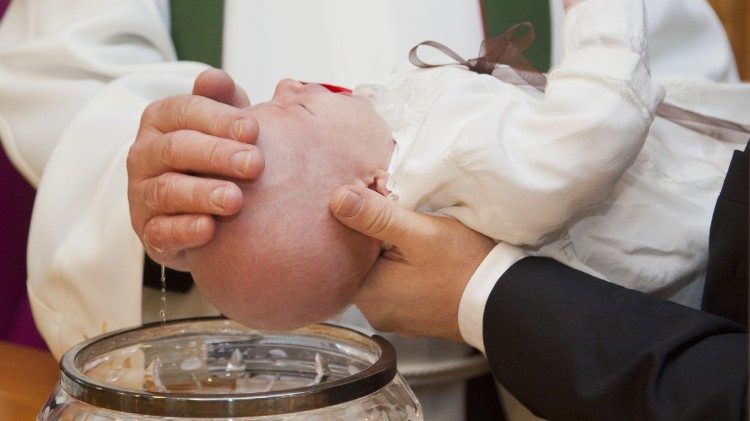 The answer then was the same as the answer given on Thursday: Such “baptisms” are not valid, and those who undergo a ceremony using those formulas must be unconditionally baptized.