Gospel for today: 5th Sunday of Lent- "It is for the glory of God”

In today’s gospel reading we hear the story of the raising of Lazarus (Jn 11, 1-45). Lazarus is the brother of Mary and Martha, and a friend of Jesus. Jesus gets word that Lazarus is ill, but rather than go immediately to heal him, Jesus waits two days. Finally our Lord says, “Our friend Lazarus has fallen asleep, but I go to awake him out of sleep.”

As an aside, the disciples here mistakenly take Jesus literally, thinking He means Lazarus is just resting. But Jesus quickly corrects them. The gospel tells us, “Then Jesus told them plainly, ‘Lazarus is dead…'” (Jn 11, 14). This illustrates that Jesus does not hesitate to clarify His meaning when He is being misunderstood. So, for example, in John 6 when Jesus tells the disciples repeatedly that they would have to eat His flesh and drink His blood to gain eternal life (speaking of the Eucharist), many take Him literally and so leave. Jesus does not correct them as He does in this instance, because they were not misunderstanding Him – though of course they could not know at that moment how His words would become true.

But returning to Lazarus, Jesus travels to his home to find him four days dead in the tomb. In fact, Martha tells Jesus that “by this time there will be an odor.” Lazarus is dead as dead can be. Nevertheless, Jesus commands them to open the tomb. He cries out, “Lazarus, come out!” And Lazarus comes out. Christ has miraculously raised him from death, so that people may know that the Father sent Him (Jn 11, 42).

I have heard some cynically say that Lazarus is to be pitied above all men, because the poor man had to die twice. There is a certain amount of truth to that. After all, Lazarus is not still walking about alive today, two thousand years later. He did, eventually, die a second death. However, he is not to be pitied, because his death – even the second time – was not the end. Jesus said in today’s reading, “This illness is not to end in death; it is for the glory of God” (Jn 11, 4). Jesus was speaking, of course, of Lazarus’ particular illness at the time, but like many things in the scriptures there is a deeper and broader meaning to be had. The “illness” Jesus mentions is our fallen human nature and our suffering due to sin (original and personal). With Christ, this illness will not end in death.

Throughout the readings today we hear talk of resurrection. In our first reading from Ezekiel, we are told, “O my people, I will open your graves and have you rise from them (Ez 37, 12). In our second reading, St. Paul tells us, “If the Spirit of the One who raised Jesus from the dead dwells in you, the One who raised Christ from the dead will give life to your mortal bodies also” (Rm 8, 11).

In our gospel today, before performing His miracle, Jesus tells Martha that her brother will rise. Martha says, “I know he will rise, in the resurrection on the last day” (Jn 11, 24). There was by this time a strong belief among most of the Jewish people (with the exception of the Sadducees) of a general resurrection, meaning our physical bodies would rise again at the end of time. They understood, as we Christians understand now, that death is not natural. It is an affliction that entered into the world as a consequence of original sin, but from the beginning was not part of God’s plan for us.

Our Catechism teaches, “Even though man’s nature is mortal, God had destined him not to die. Death was therefore contrary to the plans of God the Creator and entered the world as a consequence of sin” (CCC 1008, cf. Wis 2, 23-24).

God made us as creatures with both a material body and a spiritual soul. We could, in a way, be described as “part animal, part angel.” But this is by comparison only. The truth is we are neither. We are unique in all creation, citizens of both the physical and spiritual realms. Death is the separation of the soul from the body. Death rips apart the physical and spiritual aspects of our being. We call a body without a soul a “corpse” and a soul without a body a “ghost.” Neither are very pleasant things. This is not how God made us to be, and this is why death is so tragic and so sad.

The shortest sentence in the Bible is contained in today’s reading. “Jesus wept” (Jn 11, 35). Even the Incarnate God, who knew that He was about to raise Lazarus from the dead only moments later, mourned the death of His friend. I have known Christians to feel a bit guilty when they mourn for deceased loved ones, because they have been told that for Christians death is a happy occasion, a birth into eternal life. But here we see that even Jesus mourns the dead, and rightly so. God did not make us for death, and so death – even temporary death, as we see with Lazarus – is sad. It is right to grieve.

Martha expresses her faith in the general resurrection at the end of time. Jesus tells her, “I am the resurrection and the life; he who believes in me, though he die, yet shall he live, and whoever lives and believes in me shall never die” (Jn 11, 25). We will not exist in the world to come as disembodied spirits. Nor will we be transformed into angels or any other spiritual beings. We will be the human beings God made us to be, and that means body and soul.

Jesus is the resurrection the Jewish people awaited. He is the reason for their hope (1 Peter 3, 15). His resurrection of Lazarus is a foreshadow of His own Resurrection to come. For even the one who said, “I am the resurrection and the life” had to die. It is by His death that Christ conquerors death for us, and so if we are to rise with Him we must also die with Him.

Through baptism, the Christian has already sacramentally died with Christ. If the Christian dies in the friendship of God (not in a state of mortal sin), then physical death completes that “dying with Christ” and therefore completes our incorporation into His Resurrection (CCC 1010).

St. Ignatius of Antioch is one of my favorite early Church Fathers. He was the second bishop of Antioch after Peter (most likely ordained bishop by the Apostle), and he was instructed in the faith by the Apostle John. He is a true witness for us of the Apostolic faith. I will leave you with his words, from his letter to the Church in Rome, where he was to become a martyr for the faith around the year 110 AD. 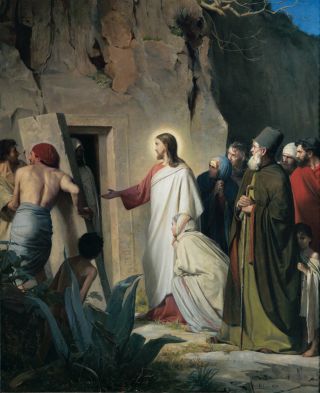 It is better for me to die in Christ Jesus than to reign over the ends of the earth. Him it is that I seek – who died for us. Him it is I desire – who rose for us. I am on the point of giving birth… Let me receive pure light; when I shall have arrived there, then shall I be a man.