“As believers grounded in our own religious convictions and with shared concern for the welfare of the human family, may we join hands with those of different religious traditions and all people of good will, and strive to do all we can – with a sense of shared responsibility – to build a more fraternal and peaceful society!”

The Pontifical Council for Interreligious Dialogue made this invitation in a message for Diwali that occurs on Sunday, October 27. Entitled, “Believers: Builders of Fraternity and Peaceful Coexistence”, the message was signed by the Council president, Card. Miguel Ángel Ayuso Guixot and its secretary, Msgr. Indunil Kodithuwakku Janakaratne Kankanamalage.

Symbolically, Diwali celebrates the victory of light over darkness, truth over lies, life over death and good over evil.

Seeing a brother or sister in the other

Alongside efforts towards interreligious and intercultural dialogue, cooperation and fraternal solidarity, the Pontifical Council noted there is also “apathy, indifference and even hatred among some religious people towards others”. This is because of a failure to recognize the ‘other’ as a brother or sister, which threatens the very fabric of harmonious coexistence in society.

In this context, the Council recalled the Abu Dhabi Document on Human Fraternity that says religion fundamentally inspires us “to see in the other a brother or sister to be supported and loved”. Religion further “teaches respect for the inviolable dignity and the inalienable rights of others without any unwarranted bias towards their creed or culture.”

According to Pope St. John Paul II, religions should sustain the efforts of their adherents in leading an authentic life "to bring forth the fruits of peace and brotherhood, for it is in the nature of religion to foster… an increasingly fraternal relationship among people”.

Thus, the Vatican message said, “living in a spirit of fraternity and fellowship through constant dialogue should be a natural corollary of being a religious person, Hindu or Christian".

The dominance of negative news, the Vatican said, should not discourage our resolve to “sow seeds of fraternity” because there is a “hidden sea of goodness that leads us to hope in the possibility of building, together with the followers of other religions and all men and women of good will, a world of solidarity and peace.”

According to Pope Francis, the fact that there is a possibility to build a world of fraternity should be reason enough for us to engage all the more in building fraternity and peaceful coexistence, keeping “the good of everyone at heart”. 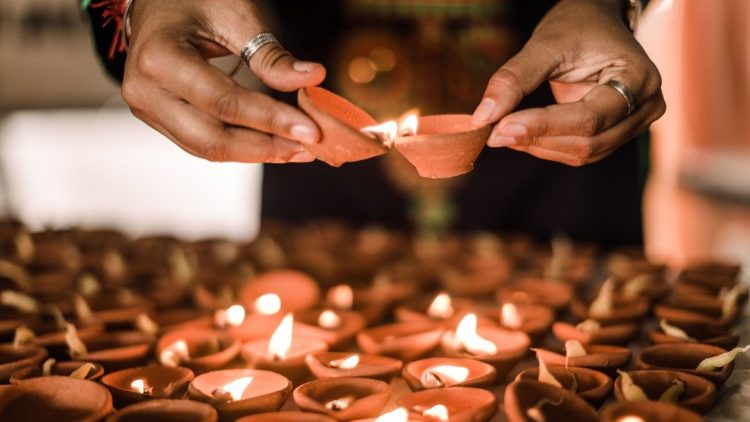 Clay oil lamps are used to mark Diwali, the Hindu festival of lights

In conclusion, the Vatican’s Diwali message drew attention to the figure of Mahatma Gandhi, “an outstanding and courageous witness to truth, love and nonviolence”. The example of the “valiant protagonist of human fraternity and peaceful coexistence”, it said, would be an inspiration for living in peaceful coexistence.